Inspirational Members: Rob Baker - A Feminist in Our Midst 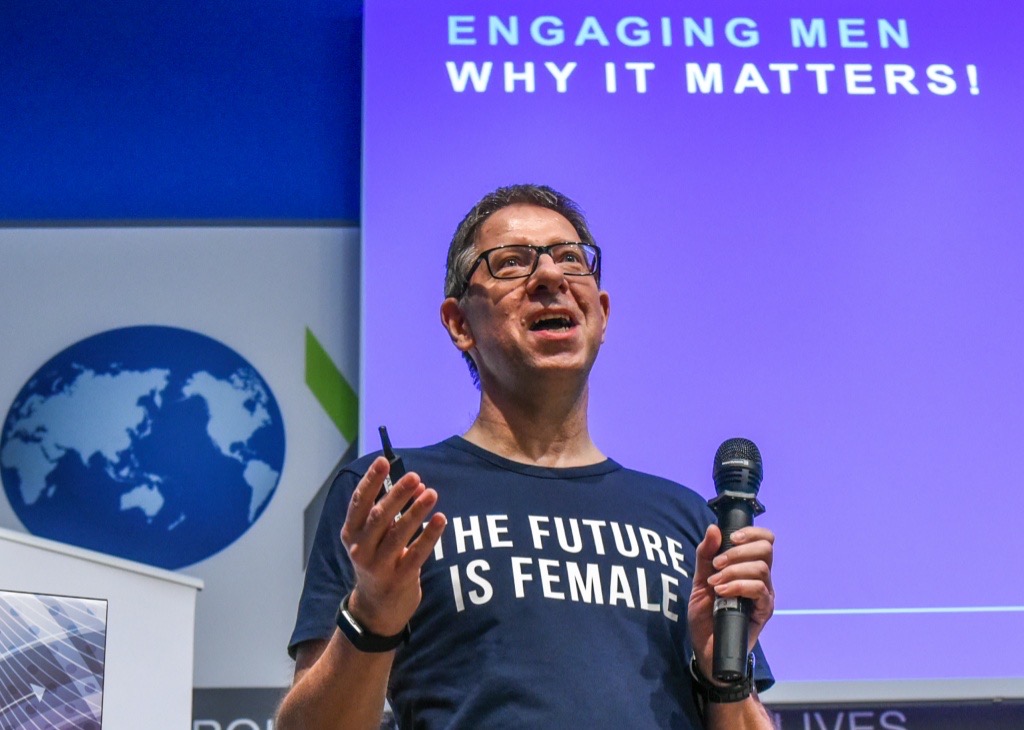 Rob Baker is a man of medium build with neatly trimmed hair, alert eyes, an open face, and is so full of energy and curiosity that you can practically feel him vibrating. On the webcast of an OECD conference for International Women’s Day, he first appears onscreen taking several sprightly steps across the stage while juggling a bottle of water and a stack of papers – an ‘everyman’ ready to tell you why he believes in every woman. He’s wearing charcoal-grey trousers, a collarless shirt and a matching jacket. He then removes the jacket to reveal a t-shirt imprinted with the slogan ‘The Future is Female’ – leaving no doubt as to why he is there. He’s a merry prankster, peddling not psychedelics but ideas and passions, ready to convert those who stray across his path.

As luck would have it, one of his passions is gender equality in the workplace. He volunteered with PWN – first with his local city network, PWN London, and then with PWN Global’s Federation Board. He served on the Federation Board for almost seven years, first as VP Engaging Men, and then for two years as Co-President with Sonya Richardson. During this time, we leveraged his curious and upbeat nature, along with his high-level position in an international consulting firm, as our stealth weapon – deploying him among unsuspecting male leaders in large corporations to convert them into believers in Gender Balanced Leadership.

The programs Rob developed for carrying out these missions included leading workshops for PWN local city networks on ‘Inspiring Men to become Advocates for Gender Balance’ – thus teaching PWN members how to recruit and deploy their male colleagues to make changes from inside the power structure.

He also developed, along with Co-President Sonya Richardson, Diversity Lab Workshops – which were held with PWN Corporate Partners throughout Europe. These labs are intimate roundtable discussions where senior decision makers listen to a brief presentation, laden with data, on the compelling evidence for a gender balanced workforce, and the best practices for creating one – which in almost all cases means hiring and promoting more women. Convinced of the business case, these decision makers hopefully return to begin implementing policies for recruiting, hiring and maintaining more women leaders in their own workforces, a great boon for PWN Global’s mission.

Rob, however, rather than describing how he helped PWN Global, may tell you the story of how volunteering for PWN Global benefited his career. He had already held several high-level positions at Mercer, as Deputy Head of Investment Consulting and Global Client Relationship Manager. Nonetheless, the insights into the issues women face in the workplace, and the data he accumulated on how increasing the number of female leaders make companies better and more profitable, allowed him to take on the role of Leader for Diversity and Inclusion.

Even more to his delight, working with PWN Global - a man in a women’s professional network - made him an interesting guest to invite to conferences, and thus gave him the opportunity to develop a new skill and grow his comfort level in something of both professional and personal interest – public speaking. These speaking engagements not only helped further the cause of female leadership, but also revealed many of his personal qualities, demonstrating how he finds ways to engage others by being flattering but not pandering, clear but not pedantic, suprising but not shocking, open, honest, and above all, fun.

This artful approach was on display at the OECD conference in ways other than the t-shirt reveal. To whit: when someone points out that, in a video he plays during his presentation, women of color were portrayed in subservient roles, while white women were portrayed in more privileged positions, Rob immediately admits that he had not picked up on that himself, offers no excuses, says that he always had something to learn, and commits to alerting the people who created the video.

These attitudes and behaviours are important to note, because if you look closely at how Rob used them to manage his career, you can probably find a treasure map of how to design your own professional future. By being curious and open to change, by taking risks, asking for things, and seeing failure as opportunity, he continually re-invented roles for himself that not only enhanced his value to his company, but also gave him new opportunities. It allowed him to have a 42-year career at the same firm without getting bored, complacent, or feeling undervalued.

There is even a name for all these qualities - it is called ‘the growth mindset’. This is a term developed by the Stanford University psychologist Carol S. Dweck, and the title of her book;  one on a long list of recommendations that Rob makes to people looking for advice on both personal and career growth.

It is also this attitude that led Rob to PWN Global, and a relationship that we are thankful for; one that has proved beneficial to both parties beyond Rob’s seven years of direct involvement. PWN Global still holds the Diversity Labs first developed during Rob’s tenure, and the corporate partnerships that he helped negotiate continue to drive growth for PWN Global.

Rob is using not just the knowledge from his career at Mercer, but also the expertise he learned from his involvement with PWN Global, and his raised profile and skill as a public speaker, to develop his next role - this time, post-retirement. He has already signed on as an advisor to several start-ups and at least one charity, and can likely soon be found on a stage somewhere, in front of an audience about to be surprised and delighted with words of wisdom, revealed the moment he takes his jacket off.