Gender Balance Blind? What Do You See In An IKEA Catalogue? 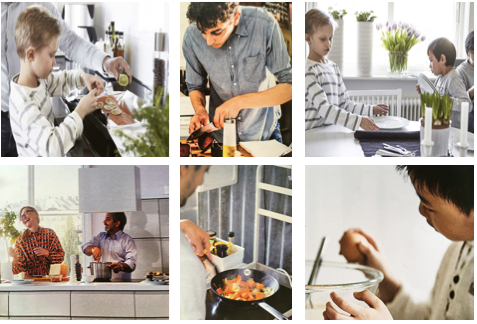 You go through Ikea Catalogue and you see furniture. Ikea is a furniture manufacturing and design company. It is quite healthy that you see furniture in their catalogue. However, if you see only furniture, but no traces of gender balance, then it may not be that healthy. Be careful! You might be a “gender balance blind” person!

A couple of years ago, gender diversity entered many of the global CEOs’ agendas and organizations started setting goals for the proportion of women in leadership roles. Since then, this subject is still a discussion point. Although there is an increase in the number of women in leadership roles and the number of NGOs working hard on women empowerment, the results are not at a satisfactory level.

One of the most important issues to achieve gender balance is unconscious gender bias against women. When it comes to understand how unconscious biases happen against women, it is not an easy and one dimension problem.

Being able to see and identify unconscious biases is another important aspect to start to overcome these problems.

To overcome unconscious biases, we may consider many remedies, including training programs on unconscious gender bias, getting habit of making others aware of it, etc. All of these things will definitely help. However, one of the most crucial things is how we bring up our children in overcoming gender biases. It starts at home, grows at the school and internalized by public interactions, media and everyday life. If you educate your children without gender diversity habits, they will not develop any bias and there will not any need to overcome against biases!

If we take Sweden, it is one of the countries with the highest number of women in leadership roles. As per European Commission database, dated 2013, Sweden has women leaders in board seats by 26,5% and it is the forth country in ranking amongst other European countries.

For such relatively good and higher numbers, how might bringing up children without gender diversity have an impact on such good results?

Before we answer this question, let’s take a gender diversity blindness test on Ikea Catalogue: When you take a look at the visuals from Ikea Magazine above, if you are able to see a little boy cracking eggs for cooking, a young boy cutting food with knife, man and woman cooking together, another man cooking food in a wok, two boys preparing the table, a little boy helping to cook fish and then,

If you are not only be able to identify these positive printings on the Ikea catalogue, but also be consciously able to identify negative sayings and visuals on gender diversity in many other advertisements, then you are not gender balance blind, either. We are still exposed to TV ads where cleaning products target only women: Husband makes things dirty and his wife cleans them. Media may reflect the culture of the society. However, with a proactive approach, it may change the society, as well. For Ikea, continuing using gender-balanced visuals, without any fear of losing customers in other countries, may create a positive impact in these cultures. To see the picture of a little boy cooking in the catalogue will create new neurotic ways in readers’ brains and people will get used to it, when they see such pictures or TV ads over and over again in the media.

PWN Istanbul Engaging Men Committee conducted two workshops on gender balance leadership in 2015 and 2016 with participation of 15 mid-senior level managers and 27 senior level executives, respectively. Interestingly enough, both of the groups emphasized the importance of chores at home and practices at schools, when they bring up “leaders of the future”. They questioned themselves whether they ensure that there are no gender biased role assignments to the kids, such as washing the dishes, emptying the trash, doing the laundry, shopping, cooking, setting the table.1 They also questioned, if they warn the school management, when they notice gender biased practices at schools.2

Of course, it is not only about bringing up children. As much important as it is how governments approach and support gender balance. I am not going to talk about quotas. I am going to talk about something that might even not require any quotas by government to support women on boards in the future! I’ll introduce you Sweden’s official site on gender equality. Yes, you read it right, Sweden has the following web page on gender equality, https://sweden.se/society/sweden-gender-equality/ and it welcomes you, as follows:

“Welcome to the official site of Sweden.

Sweden believes that women and men should have equal power to shape society and their own lives. Often considered a gender equality role model, Sweden has come a long way. Still, there’s room for improvement.”

It is nice to see how early they started gender balance studies and how eager for further development realistically by accepting room for improvement. Based on the information in the official web page:

“Rape and abduction prohibited in Sweden in 1250s. A school reform allowed girls to be educated in 1842. Widows, divorcees and unmarried women entitled to work in certain areas in1846.

In1919, all women gain the right to vote. Birth control and abortion legalized in 1938. In 1947 a new law on universal child allowances was effective as well as the first woman was in government.

Three months' paid maternity leave was given for working women in1955.

Joint taxation of spouses abolished in 1971.

Parental leave replaced maternity leave in 1974. (Weightlifter 'Hoa-Hoa', above, was later used to promote daddy leave, even though he didn't take any himself)

Abortion permitted until 18th week of pregnancy in 1975.Gender discrimination in the workplace made illegal in 1980. New law on gender equality which was replaced by the Discrimination Act in 2009 was effective in1991.

In 2002, parental leave defined as 480 days: two months reserved for each parent. Sweden gets an Equality Ombudsman in 2009.

We can introduce programs and try to create awareness on gender balance at our corporate environment. With no doubt, these efforts will help to improve. However, to internalize gender balance and create a bigger impact, two things are vitally important:

The first thing is how we grow up our children and what they are exposed in printed and visual media.

The second thing is how our governments sensitively and consciously put gender balance in their own agendas.

In our journey of achieving gender balance, we need more Ikea-like advertisements that support gender-balanced chores at home and other living areas from early childhood and structured, sustainable programs on gender balance by governments.